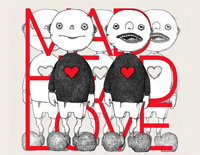 Free Mad Head Love piano sheet music is provided for you. So if you like it, just download it here. Enjoy It!

Mad Head Love is a song by Japanese musician Kenshi Yonezu. It was released as a double A-side single alongside the song "Poppin' Apathy" on October 23, 2013 by Universal Signma, on the same day that Yonezu's two self-released Vocaloid albums, Hanataba to Suisō and Official Orange, were re-issued by independent label Boundee by SSNW.

A music video for "Mad Head Love" was released online on September 21, 2013, and was directed by Sojiro Kamitani, who also directed a video for "Poppin' Apathy". "Mad Head Love" features three different scenes. Yonezu is shown performing different instruments such as a red Fender Telecaster electric guitar and a keyboard, as well as holding a recording device and listening through headphones. Other scenes show a Caucasian man and woman in beige clothing. They interact by prodding each other, such as poking the other person's ear, or messing up their hair. Other scenes show strange moving contraptions, such as one that turns a toy horse around, or a golden crane that drops a plastic fish onto a plate. The video for "Poppin' Apathy" was shot in the same location as "Mad Head Love", but in a darker, more cluttered environment. Meanwhile, we also offer Uchiage Hanabi sheet music for you to download