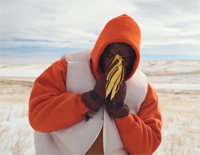 Follow God
is a song by American recording artist Kanye West from his ninth studio album, Jesus Is King. The song was written by West, Jahmal Gwin, Bryant Bell, Aaron Butts, Calvin Eubanks and Curtis Eubanks, while produced by West, Xcelence and Boogz. It was released to US rhythmic contemporary radio stations through GOOD Music and Def Jam as the lead single from the album on November 12, 2019. A lyric video was released for the song in October 2019, shortly followed by a music video on November 8.

On the UK Singles Chart, "Follow God" debuted at number six, standing as the highest charting track from the album. It also marked one of three new entries in the top ten of the chart for that week and gave West his 23rd top ten single.


Meanwhile, we also offer Runaway sheet music for you to download