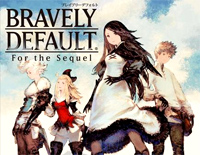 Free Kibou e Mukau Tanshikyoku piano sheet music is provided for you. So if you like it, just download it here. Enjoy It!

Kibou e Mukau Tanshikyoku
is one of the background music to the game Bravely Default. Bravely Default was originally released in 2012, while an expanded edition titled For the Sequel released in 2013 in Japan, Europe and Australia, and in 2014 in North America. Square Enix published the game in Japan, while Nintendo handled publishing duties overseas. The gameplay uses a turn-based battle system and job system, in addition to incorporating options to combine job abilities and adjust battle speed and random encounter rates.

And Kibou e Mukau Tanshikyoku is sung by Sound Horizon, a Japanese musical group with composer Revo as the leader. They describe themselves as a "fantasy band" and have released works that closely resemble classical suites.