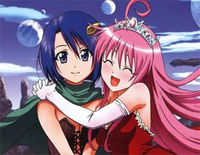 Free Foul Play ni Kurari piano sheet music is provided for you. So if you like it, just download it here. Enjoy It!

Foul Play ni Kurari is used as the ending theme song to the anime series To Love Ru. Produced by Xebec and directed by Takao Kato aired in Japan between April 4 and September 26, 2008, and contains twenty-six episodes, the anime uses characters and general themes from the original manga, it captures various chapters and events from the manga in no specific order.

And Foul Play ni Kurari is sung by Kanon Wakeshima who is a Japanese musician and singer. Originally produced by musician and fashion designer Mana, Wakeshima debuted under the DefStar Records label on May 28, 2008.