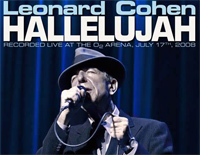 Free Hallelujah piano sheet music is provided for you. So if you like it, just download it here. Enjoy It!

Hallelujah
is a song written by Canadian singer Leonard Cohen, originally released on his album Various Positions. Achieving little initial success, the song found greater popular acclaim through a recording by John Cale, which inspired a recording by Jeff Buckley. It is considered as the "baseline" of secular hymns.

Following its increased popularity after being featured in the film Shrek (2001), many other arrangements have been performed in recordings and in concert, with over 300 versions known. The song has been used in film and television soundtracks and televised talent contests. "Hallelujah" experienced renewed interest following Cohen's death in November 2016 and appeared on many international singles charts, including entering the American Billboard Hot 100 for the first time.


Meanwhile, we also offer different version of Hallelujah sheet music for you to download

The Lyrics of Hallelujah: