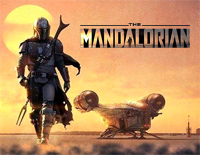 Free The Mandalorian piano sheet music is provided for you. So if you like it, just download it here. Enjoy It!

Set in the Star Wars universe, the series takes place five years after the events of Return of the Jedi and follows a Mandalorian bounty hunter beyond the reaches of the New Republic. Jon Favreau serves as creator, head writer, and showrunner, as well as executive producer, alongside Dave Filoni, Kathleen Kennedy, and Colin Wilson. The show stars Pedro Pascal in the title role. There will be eight episodes in the first season, and a second season has been ordered. As of December 2019, the series has received very positive reviews, with the visuals and characters being highly praised.