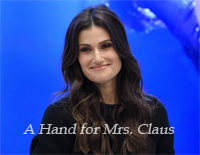 Free A Hand for Mrs. Claus piano sheet music is provided for you. So if you like it, just download it here. Enjoy It!

A Hand for Mrs. Claus
is a song performed by Idina Menzel featuring Ariana Grande. It was included in American singer and actress Idina Menzel's second Christmas album Christmas: A Season of Love released through School Boy and Decca Records on October 18, 2019. It is an original song by the composers of the Frozen soundtrack, Kristen Anderson-Lopez and Robert Lopez.


Meanwhile, we also offer Into the Unknown sheet music for you to download

The Lyrics of A Hand for Mrs. Claus:

Idina Menzel：
Every December we always remember
To celebrate the fella in the suit
We see the promos for reindeer and his glow nose
Believe me I think Rudolph's nose is cute
Now I'm a fan of Frosty
I go ga-ga for The Grinch
But beneath the hype are they the type
You'd turn to in a pinch
There's someone more deserving of applause
How 'bout a hand for Mrs. Claus
Mm
Ariana Grande：
I'm not complaining
I'm sure it's very draining
Pulling off a Christmas Eve world tour
My point in this is it's his marvelous missus
Who gets it done the other three-six-four
Who's really checkin' all those lists
And fillin' all them shelves
She's a master multitasker who works faster than the elves
Who keeps the North Pole hot 'til winter thaws
The answer's clear it's Mrs. Claus
Mm
Idina Menzel/Ariana Grande：
She reads every Christmas letter
Fills out a Christmas sweater
Better than old Santa any day
She runs the operation
With no appreciation
Send a little Christmas love her way
Oh oh yeah
Idina Menzel：
She just gets no respect
She works so hard
Now I'll sing a fa-la-la
And I'll shout a ho-ho-ho
But I'm bouncin' out this ballad for the gal who runs the show
Join me in this very worthy cause
How 'bout a hand for
Oh oh yeah
Let's make it grand for
Ooh ooh ooh ooh
Everybody stand for Mrs. Claus