Tell Me Your Wish Genie 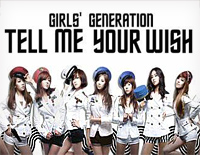 Tell Me Your Wish Genie Introduction

Free Tell Me Your Wish (Genie) piano sheet music is provided for you. So if you like it, just download it here. Enjoy It!

Tell Me Your Wish (Genie) is a song recorded by South Korean girl group Girls' Generation for their second extended play (EP) of the same name. It was released on June 22, 2009 as a single from the EP. Written by Dsign Music, Fridolin Nordso Schjoldan, and Yoo Young-jin, and produced by Young-jin, the song is the group's first collaboration with Western composers and producers, which was later encouraged towards their future music.

Musically, "Genie" carried on the group's phase of bubblegum pop music from their debut. Lyrically, the song discusses the elements of love and relationships, alongside granting the wishes of their partner. It received generally positive reviews from music critics, many of whom highlighted the track as one of the highlights on the EP. The single was well received domestically, achieving the top spots on music programs Inkigayo and Music Bank.


Meanwhile, we also offer Divine sheet music for you to download
[ + More Information ]

Tell Me Your Wish GeniePDF File