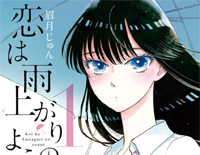 Free Ref:rain piano sheet music is provided for you. So if you like it, just download it here. Enjoy It!

Ref:rain is the ending theme song to the anime series After the Rain. Originally After the Rain is a Japanese manga series written and illustrated by Jun Mayuzuki. The series began serialization in Shogakukan's Monthly Big Comic Spiritsmagazine in 2014, before moving to the magazine Weekly Big Comic Spirits in 2016. An anime television series adaptation by Wit Studio aired from January 12 to March 30, 2018, on the Noitamina programming block.

And Ref:rain is sung by Aimer who is a Japanese pop singer and lyricist signed to SME Records and managed by FOURseam. Her name comes from the verb "Aimer" in French which means "to love".