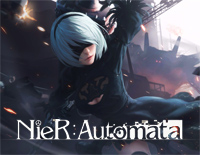 Free Vague Hope Cold Rain Perfect Version piano sheet music is provided for you. So if you like it, just download it here. Enjoy It!

Vague Hope-Cold Rain is a song from the action role-playing hack and slash video game Nier: Automata. Production began in 2014, with series creator Yoko Taro, producer Yosuke Saito, and lead composer Keiichi Okabereturning to their respective roles, as well as Square Enix artist Akihiko Yoshida in charge of character design. The story is based around themes similar to Yoko's earlier works, such as people's impulse to kill and nihilism, while also incorporating issues such as confronting prejudice and escaping difficult situations. The goal was to make a Nier game true to the spirit of the original, while simultaneously crafting a better combat system. As a project entirely new to the developers, the staff at Platinum Games faced multiple challenges when developing its gameplay and open worldenvironment.

The Lyrics of Vague Hope-Cold Rain: