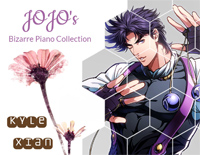 Free Voodoo Kingdom piano sheet music is provided for you. So if you like it, just download it here. Enjoy It!

Voodoo Kingdom
appeared in the theatrical film JoJo's Bizarre Adventure: Phantom Blood. The movie was produced by A.P.P.P. and released in Japanese theaters in 2007.

And Voodoo Kingdom is originally performed by Soul'd Out, a Japanese hip-hop band that consists of three members: Diggy-MO' (Main MC), Bro.Hi (MC/Human Beat Box), and Shinnosuke (Trackmaster). Their name is a pun of "soul (music)" and "sold out".

Meanwhile, we also offer Don't You Know sheet music for you to download