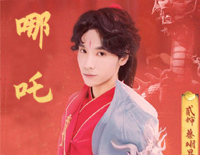 Free Ne Zha piano sheet music is provided for you. So if you like it, just download it here. Enjoy It!

Ne Zha
is sung by CcccEs, also named Er Shen who is a Chinese singer. Ne Zha originally is a protection deity in Chinese folk religion. His official Taoist name is "Marshal of the Central Altar". He was then given the title "Third Lotus Prince" after he became a deity. And The song is just on the background of Ne Zha.

Meanwhile, we also offer Heather's Short Note sheet music for you to download