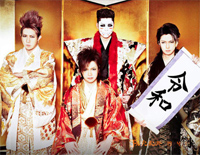 Free Reiwa piano sheet music is provided for you. So if you like it, just download it here. Enjoy It!

Reiwa
is sung by Golden Bomber, a Japanese visual kei "air" rock band formed in 2004 and signed to the independent label Euclid Agency (sublabel Zany Zap). Despite not actually performing the music themselves, they have gained popularity through their theatrical "live shows". Currently, Golden Bomber have released 12 singles and 11 albums, some of which have gained the top places in national Oricon chart.

Meanwhile, we also offer Memeshikute sheet music for you to download