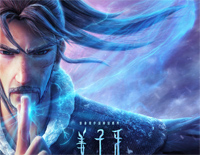 Free Jiang Ziya piano sheet music is provided for you. So if you like it, just download it here. Enjoy It!

Jiang Ziya is used as the theme song to Chinese 3D computer-animated fantasy adventure film Legend of Deification. Featuring the popular Chinese mythological figure Jiang Ziya, the plot is loosely based on the classic novel Investiture of the Gods, attributed to Xu Zhonglin. It is the sequel to 2019's Ne Zha and the second installment of the Fengshen Cinematic Universe.

And Jiang Ziya is sung by Jason Zhang who is a Chinese pop singer. Zhang made his television series debut in the reality singing competition My Show in 2004 which he won.