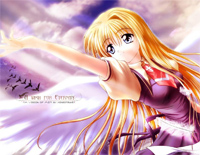 Free Tori no Uta Perfect Version piano sheet music is provided for you. So if you like it, just download it here. Enjoy It!

Tori no Uta is used as the theme song for the game AIR as well as the anime series with the same name.

Tori no Uta has been released many times in original and remix versions. The song was first released as a shortened version spanning 3:09 minutes on I've Sound's July 2000 compilation album Verge. The first release of the song on Key Sounds Label, the record label affiliated with Key, was on the 2001 album Humanity... as a remix version subtitled "Bossanova version" and was sung by Mina Minomo. The full-length original version of the song was first released on the limited edition remix album Ornithopter (September 2000) originally bundled with the first printing release of the Air game. The song was later widely distributed on the Air Original Soundtrack (2002), the soundtrack of the visual novel, in original, short, and instrumental versions.


Meanwhile, we also offer different version of Bird's Poem-Tori no Uta sheet music for you to download
[ + More Information ]