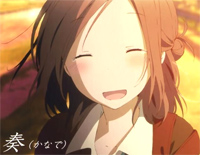 Free Kanade piano sheet music is provided for you. So if you like it, just download it here. Enjoy It!

Kanade, also named Symphony, is used as the ending theme song for the anime series One Week Friends. The anime is produced by Brain's Base and directed by Tarou Iwasaki, with script writing by Shôtarô Suga, character designs by Eri Yamazaki and soundtrack music by Nobuko Toda.

And Kanade is sung by Sora Amamiya who is a Japanese voice actress and singer from Tokyo, Japan. She is affiliated with Music Ray'n.


Meanwhile, we also offer different version of Kanade sheet music for you to download
[ + More Information ]