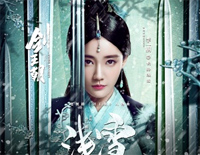 Free Light Snow piano sheet music is provided for you. So if you like it, just download it here. Enjoy It!

Light Snow is a song performed by Li Yi Tong as an insert song for 2019 Chinese live-action web television series Sword Dynasty. The production staff for the live-action series was announced in November 2017, with Feng Xiaogang as executive producer, Jones Wah-Kon Ma as the main director, Rao Jun as the main screenwriter and To-hoi Kong as the stunt coordinator. Based on the novel of the same name by Wu Zui, the series airs on iQiyi starting December 6, 2019.