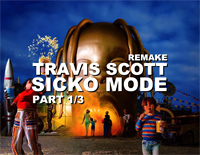 Free Sicko Mode piano sheet music is provided for you. So if you like it, just download it here. Enjoy It!

Sicko Mode debuted at number four on the US Billboard Hot 100. It reached number two following the release of its music video, first behind "Girls Like You" by Maroon 5 featuring Cardi B, and then behind "Thank U, Next" by Ariana Grande. It later became his first number one on the issue dated December 8, 2018, after seventeen weeks in the top 10, aided in part by the Skrillex remix. The single also became his first top 10 on the Radio Songs chart. It finished 3rd in Triple J's Hottest 100 2018.


Meanwhile, we also offer Wake Up sheet music for you to download

The Lyrics of Sicko Mode: