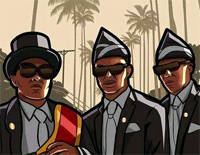 Free Astronomia piano sheet music is provided for you. So if you like it, just download it here. Enjoy It!

Astronomia is a coffin dance meme song by producer Tony Igy. On March 13th, 2010, Russian EDM producer Anton Igumnov (Tony Igy) released track "Astronomia", uploading it to PromoDJ on April 28th. The song received over 250,300 listens on the site in ten years. During 2010, the song was included into rotation of several Russian FM radio stations, reaching first place on Russian radio station DFM in November 2010. On December 21st, 2015, a music video for the song was uploaded to YouTube, gaining over 1.8 million views in four years (shown below, left). A February 2018 reupload of the video received over 4.8 million views in two years. In 2019, the song gained popularity on TikTok.