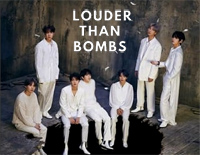 Free Louder Than Bombs piano sheet music is provided for you. So if you like it, just download it here. Enjoy It!

Louder Than Bombs is a song from South Korean boy band BTS' fourth Korean-language studio album Map of the Soul: 7. The album debuted atop the US Billboard 200 with 422,000 album-equivalent units sold in the first week, including 347,000 pure album sales, making it BTS' fourth consecutive chart-topper. It also debuted at number one in many other countries, including Australia, Canada, France, Germany, Japan, New Zealand, Spain and the United Kingdom; topping the charts in all of the top five music markets in the world, made BTS the first Asian group to do so.


Meanwhile, we also offer Serendipity sheet music for you to download
[ + More Information ]