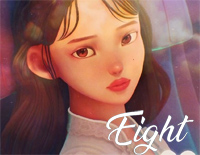 Free Eight piano sheet music is provided for you. So if you like it, just download it here. Enjoy It!

Eight is a song recorded by South Korean singer-songwriter IU featuring Suga, the rapper of South Korean boy band BTS. It was released as a digital single on May 6, 2020 by EDAM Entertainment. It is IU's first single following the release of her fifth EP Love Poem.

The song received generally positive review from music critics, who not only praised its lyrics and production, but also compared the song to the works of musicians such as Avicii, Zedd and Alessia Cara. Commercially, the single debuted at number one on the South Korean Gaon Digital Chart. It also entered the Billboard World Digital Song Sales chart at number one. The accompanying music video for "Eight" was directed by Kim Woogie (GDW) and features IU revisiting various phases of her youth through her memories.