When Will My Life Begin-Tangled OST 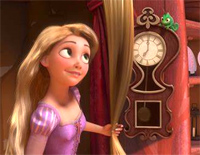 Download Sheet Music When Will My Life Begin-Tangled OST

When Will My Life Begin-Tangled OST Introduction

Free When Will My Life Begin piano sheet music is provided for you. So if you like it, just download it here. Enjoy It!

When Will My Life Begin is a song from Disney's 2010 animated feature film, Tangled. It is sung by Rapunzel (Mandy Moore), and serves as the "I Want" song of the film. It is reprised later on once she is allowed out of the tower for the first time. A short reprise with Rapunzel reiterating her situation, and reasoning that "I've got my mother's love...I have everything" etc., was cut from the final film, though was included in the soundtrack. Lyrics are by Glenn Slater, and music is by Alan Menken.


Meanwhile, we also offer I See the Light sheet music for you to download

The Lyrics of When Will My Life Begin:

Seven A.M. the usual morning line-up
Start on the chores and sweep 'till the floor's all clean
Polish and wax do laundry and mop and shine up
Sweep again and by then it's like seven-fifteen
And so I'll read a book
Or maybe two or three
I'll add a few new paintings to my gallery
I'll play guitar and knit and cook and basically
Just wonder when will my life begin
Then after lunch it's puzzles and darts and baking
Paper mache a bit of ballet and chess
Pottery and ventriloquy candle-making
Then I'll stretch
Maybe sketch
Take a climb
Sew a dress
And I'll be reread the books if I have time to spare
I'll paint the walls some more
I'm sure there's room somewhere
And then I'll brush and brush
And brush and brush my hair
Stuck in the same place I've always been
And I'll keep wonderin'
And wonderin'
And wonderin'
And wonderin'
When will my life begin
Tomorrow night
The lights will appear
Just like they do on my birthday each year
What is it like
Out there where they glow
Now that I'm older
Mother might just let me go

When Will My Life Begin-Tangled OST Stave Preview ( Total 5 )