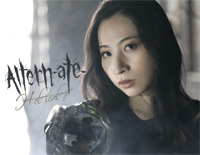 Free Altern-ate- piano sheet music is provided for you. So if you like it, just download it here. Enjoy It!

Altern-ate- is used as the opening theme song for the anime series Gleipnir. It was performed by H-el-ical//.

Gleipnir originally is a Japanese manga series by Sun Takeda. It has been serialized in Kodansha's seinen manga magazine Young Magazine the 3rd since October 2015 and has been collected in eight tankōbon volumes. The manga is published in North America by Kodansha Comics. An anime television series adaptation by Pine Jam premiered on April 5, 2020.


Meanwhile, we also offer Ame to Taieki to Nioi sheet music for you to download
[ + More Information ]