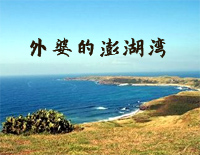 }
Free Grandma's Penghu Bay piano sheet music is provided for you. So if you like it, just download it here. Enjoy It!

Grandma's Penghu Bay is a song covered by singer Liu Wenzheng released in 1980. Originally it is performed by Pan An-bang who was a Taiwanese pop and folk singer, television presenter and actor. And the song is one of the classic Taiwanese campus folk songs in the late 1970s.