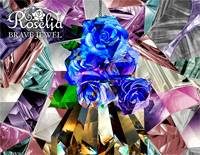 Free BRAVE JEWEL piano sheet music is provided for you. So if you like it, just download it here. Enjoy It!

BRAVE JEWEL is the opening theme song for the second season of BanG Dream!. Among Western reviewers, the second season was generally seen as an improvement story- and animation-wise. In an article for Polygon, Julia Lee listed the season as one of "six new anime series to watch this winter", praising the emphasis on the new bands and the switch to CGI "without losing much of the artistic style that made the first (season) pop."