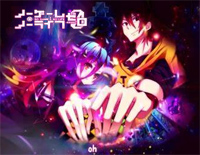 Free One Day Sky piano sheet music is provided for you. So if you like it, just download it here. Enjoy It!

One Day Sky is a song from Japanese animated film No Game No Life: Zero. Based on the sixth volume of the light novel series No Game No Life by Yuu Kamiya, the film was directed by Atsuko Ishizuka at studio Madhouse. It premiered in Japan on July 15, 2017.

And One Day Sky is sung by Konomi Suzuki, a Japanese singer from Osaka Prefecture who is signed to Mages. After winning the Animax All-Japan Anisong Grand Prix in 2011, she made her debut in 2012.