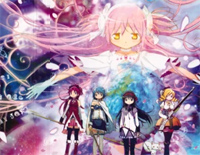 Free Symposium Magarum piano sheet music is provided for you. So if you like it, just download it here. Enjoy It!

Symposium Magarum is an insert song for Japanese anime television series Puella Magi Madoka Magica. The series became a commercial success; each Blu-ray Disc volume sold more than 50,000 copies in Japan. The series garnered a variety of awards, such as the Television Award at the 16th Animation Kobe Awards, as well as 12 Newtype Anime Awards and the Grand Prize for animation in the 2011 Japan Media Arts awards.