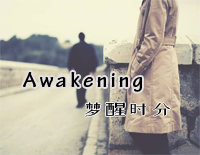 Free Awakening piano sheet music is provided for you. So if you like it, just download it here. Enjoy It!

Awakening is a song by Sarah Chen, a Taiwanese singer who became famous during the late-1980s and early-1990s. It was included in her 1989 album Talk to You, Listen to You which became the first album to reach a million sales in Taiwan. Meanwhile, it was ranked number 4 in "Best of 80s".