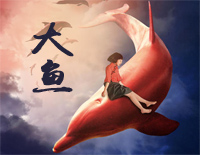 Free Big Fish piano sheet music is provided for you. So if you like it, just download it here. Enjoy It!

Big Fish is a song from 2016 Chinese animated epic fantasy film Big Fish & Begonia. The first animated feature film of B&T Studio collaborating with Studio Mir, it is a joint investment by B&T and Enlight Media. It was released in both 2D and 3D formats in China by Enlight Media on 8 July 2016.

And Big Fish is sung by Chinese male singer Zhou Shen. It won the Top 10 Songs of the Year and honoured him with the People's Choice Male Singer of ERC Chinese Top Ten Awards 2017.