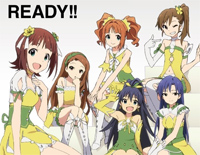 Free Ready!! piano sheet music is provided for you. So if you like it, just download it here. Enjoy It!

Ready!! is the first opening theme song from episode 2 to 12 to the anime series The Idolmaster. The anime is produced by A-1 Pictures and directed by Atsushi Nishigori, series composition by Atsushi Nishigori and Tōko Machida, character design by Atsushi Nishigori, art directed by Kushiro Usui and sound directed by Hiromi Kikuta. Based on The Idolmaster 2, the anime follows a group of thirteen pop idols from 765 Productions studios and their goal to become the most popular idols in Japan. The anime aired from July 8, 2011 to December 23, 2011 on TBS and on later dates on MBS, CBC, RKB and BS-i. An original video animation episode was released on June 16, 2012.


Meanwhile, we also offer Reason sheet music for you to download
[ + More Information ]