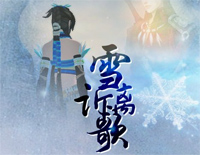 Free Snow Telling the Departure Song piano sheet music is provided for you. So if you like it, just download it here. Enjoy It!

Snow Telling the Departure Song is a song performed by Meng Lan and Ling Zhixuan as an insert song for GuJian. GuJian is a 3D role-playing video gamedeveloped by Aurogon with the Gamebryo engine and published by Gamebar. The first installment of the Gujian series, it was originally released in China on July 10, 2010 for Microsoft Windows. An Xbox One port of the game was announced in 2014.