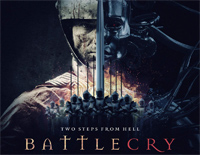 Free Victory piano sheet music is provided for you. So if you like it, just download it here. Enjoy It!

Victory is a song by the group Two Steps from Hell from their eighth public album Battlecry released April 28, 2015. It was used in the NOVA/PBS documentary Day the Dinosaurs Died, during the introduction of the Chicxulub crater. Battlecry is the first public album by Two Steps from Hell being released on two discs and furthermore the first public release to feature instrumental versions of two tracks. The cover artwork and the sleeve are designed by Steven R. Gilmore.