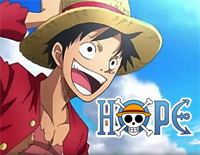 Free Hope piano sheet music is provided for you. So if you like it, just download it here. Enjoy It!

Hope is one of the opening theme song for One Piece, a Japanese anime television series adapted from the manga of the same name by Eiichiro Oda. Produced by Toei Animation, One Piece premiered in Japan on Fuji TV in October 1999, has aired over 900 episodes, and has been exported to various countries around the world.

And Hope is sung by Namie Amuro, a Japanese former recording artist, producer, songwriter, dancer, model, actress and entrepreneur who was active between 1992 and 2018.


Meanwhile, we also offer We are! sheet music for you to download
[ + More Information ]