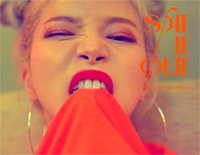 Free Spit It Out piano sheet music is provided for you. So if you like it, just download it here. Enjoy It!

Spit It Out is the debut solo single album by South Korean singer and Mamamoo member Solar, released on April 23, 2020 by RBW.

The song was written by Solar and Kim Do-hoon, who also produced the single alongside rapper Sleepy. A music video was released simultaneously with the single. "Spit It Out" is dark pop and Latin pop song that features latin guitar riffs which blends with "unique synth sounds" and contains a catchy hook.

In South Korea, the song debuted at number 96, later peaking at number 76 on the Gaon Digital Chart. The physical version went on to debut at number two on the Gaon Album Chart. Moreover, the song attained international success, becoming her first top ten single on Billboard's World Digital Songs chart. The song gave Solar her first-ever music show win on SBS MTV's The Show on April 28, 2020.