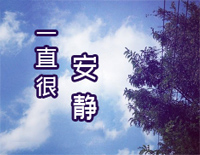 Free Constant Silence piano sheet music is provided for you. So if you like it, just download it here. Enjoy It!

Constant Silence is a song performed by Taiwanese Mandopop singer-songwriter A-Sun as an insert song for Chinese Paladin. Chinese Paladin is a 2005 Chinese television series adapted from the original version of the Chinese action role-playing game The Legend of Sword and Fairy by Softstar Entertainment. The series was produced by Chinese Entertainment Shanghai and starred cast members from mainland China, Taiwan, Hong Kong and Singapore.