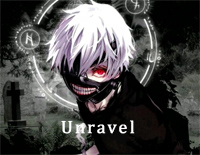 Unravel is the first solo single by Tōru "TK" Kitajima, from the band Ling Tosite Sigure. It was released on July 23, 2014 by Sony Music Entertainment Japan.

And Unravel is used as the opening theme for the anime series Tokyo Ghoul. Originally Tokyo Ghoul is a Japanese dark fantasy manga series written and illustrated by Sui Ishida. Then a 12-episode anime television series adaptation by studio Pierrot aired on Tokyo MX between July 4, 2014, and September 19, 2014. A 12-episode second season, Tokyo Ghoul √A (pronounced Tokyo Ghoul Root A), which follows an original story, began airing on January 9, 2015, and concluded on March 27, 2015. In North America, Viz Media is publishing the manga while Funimation has licensed the anime series for streaming and home video distribution.


Meanwhile, we also offer different version of Unravel sheet music for you to download
[ + More Information ]