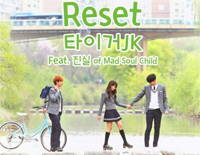 Reset-Who Are You School 2015 OST Introduction

Free Reset piano sheet music is provided for you. So if you like it, just download it here. Enjoy It!

Reset is used as an insert song for South Korean television series Who Are You: School 2015. The series aired on KBS2 from April 27 to June 16, 2015 every Monday and Tuesday at 21:55 KST for 16 episodes. The drama received 6.3% average audience share during its run. However, it was well-received overseas and established a strong following among young viewers worldwide and led to increased recognition for its cast.