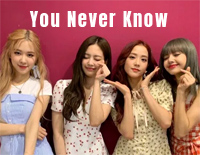 Free You Never Know piano sheet music is provided for you. So if you like it, just download it here. Enjoy It!

You Never Know is a song from South Korean girl group Blackpink's debut Korean-language studio album The Album released on October 2, 2020, by YG Entertainment and Interscope. Blackpink became the first-ever million-selling K-pop girl group with The Album, selling approximately 1.2 million copies in less than a month after release.

And You Never Know is a heartfelt, pop balladry with "majestic vocals and a sense of triumph." Thematically, the track is about patience and empathy.