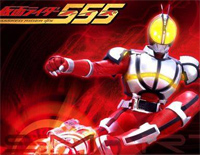 Free JustiΦ's piano sheet music is provided for you. So if you like it, just download it here. Enjoy It!

JustiΦ's is the theme song for Kamen Rider 555 that is a Japanese tokusatsu television series. It is the 13th installment in the Kamen Rider Series. It is a joint collaboration between Ishinomori Productions and Toei, and was broadcast on TV Asahi from January 26, 2003 to January 18, 2004. This series was the first to use TV Asahi's current logo. It aired as a part of TV Asahi's 2003 Super Hero Time block, alongside Bakuryū Sentai Abaranger.