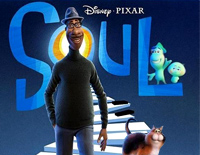 Free Embark piano sheet music is provided for you. So if you like it, just download it here. Enjoy It!

Embark is a song performed by Singaporean singer JJ Lin as the Chinese theme song for 2020 American computer-animated comedy film Soul. The film is directed by Pete Docter and co-directed by Kemp Powers, from a screenplay and story by Docter, Powers, and Mike Jones. It received critical acclaim and holds a rare 100% approval rating on Rotten Tomatoes. Critics praised its animation, story, voice acting, and music.


Meanwhile, we also offer The Lost Ones sheet music for you to download
[ + More Information ]