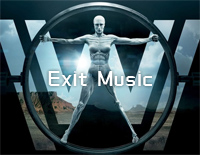 Free Exit Music piano sheet music is provided for you. So if you like it, just download it here. Enjoy It!

Exit Music
is used as an insert song of the American television series Westworld. The series was critically acclaimed during its first season, receiving praise for its performances, visuals, narrative, themes and Ramin Djawadi's musical score. It continued to receive mostly positive reviews during its second and third seasons, though certain elements of its story and characterization have since come under criticism. The series has received numerous accolades, winning 9 Primetime Emmy Awards out of 43 nominations. Thandie Newton won the Primetime Emmy Award for Outstanding Supporting Actress in a Drama Series in 2018.


Meanwhile, we also offer A Forest sheet music for you to download
[ + More Information ]