scaPEGoat-Seraph of the End ED 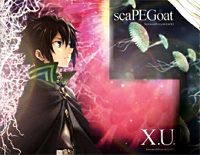 scaPEGoat-Seraph of the End ED Introduction

Free ScaPEGoat piano sheet music is provided for you. So if you like it, just download it here. Enjoy It!

ScaPEGoat is used as the ending theme song for Seraph of the End. Hiroyuki Sawano produced and co-composed the music.

Originally Seraph of the End is a Japanese dark fantasy manga series written by Takaya Kagami and illustrated by Yamato Yamamoto with storyboards by Daisuke Furuya. An anime adaptation by Wit Studio was broadcast in two cours. The first cour aired from April to June 2015. The second cour aired from October to December 2015. A series of light novels focused on Yu's superior, Guren Ichinose, has been written by Kagami and illustrated by Yamamoto.


Meanwhile, we also offer X.U. sheet music for you to download
[ + More Information ]