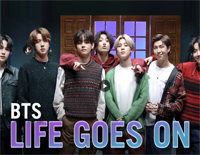 Free Life Goes On piano sheet music is provided for you. So if you like it, just download it here. Enjoy It!

Life Goes On is a song recorded by South Korean boy band BTS. It was released on November 20, 2020, through Big Hit and Columbia. The song was released as the lead single from the group's fifth Korean-language studio album Be, released the same day.

BTS performed "Life Goes On" alongside "Dynamite" at the American Music Awards of 2020, on November 22, 2020. The next day, they performed on Good Morning America and on The Late Late Show with James Corden on 24 November.


Meanwhile, we also offer Louder Than Bombs sheet music for you to download
[ + More Information ]