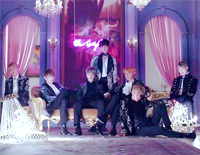 Free Blood Sweat & Tears piano sheet music is provided for you. So if you like it, just download it here. Enjoy It!

Blood Sweat & Tears is a song recorded in two languages (Korean and Japanese) by South Korean boy band BTS. The Korean version was released on October 10, 2016, as the lead single from the band's second studio album, Wings (2016), by Big Hit Entertainment. The Japanese version of the song was released on May 10, 2017, through Universal Music Japan.

And Blood Sweat & Tears received generally positive reviews from music critics, who were favourable towards its production, the refreshing sound and BTS' vocal delivery. It was also likened to the musical styles of Major Lazer and Justin Bieber. It was nominated for the Song of the Year at the 2016 Mnet Asian Music Awards and appeared on the decade-end lists of the best K-pop songs by Billboard and GQ.