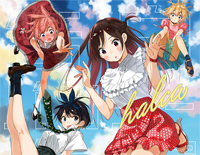 Free Kokuhaku Bungee Jump piano sheet music is provided for you. So if you like it, just download it here. Enjoy It!

Kokuhaku Bungee Jump is used as the ending theme song for the anime series Rent-A-Girlfriend. The series was animated by TMS Entertainment and directed by Kazuomi Koga, with Mitsutaka Hirota handling series composition, Kanna Hirayama designing the characters, and Hyadain composing the music. A second season has been announced.

And Kokuhaku Bungee Jump is sung by Halca that is a Japanese musician affiliated with Music Ray'n and signed to Sacra Music. She was the opening act for the Chico with HoneyWorks 2017 tour.