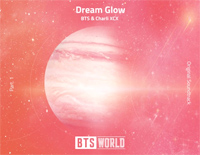 Free Dream Glow piano sheet music is provided for you. So if you like it, just download it here. Enjoy It!

Dream Glow is a song by Jin, Jimin and Jungkook of the South Korean boy band BTS and British singer Charli XCX, released as a single on June 7, 2019. It was produced by Stargate, and is the first song from the soundtrack of their BTS World game, released on June 26.

Actually it is a reworked version of an unreleased Charli XCX song that was titled "Glow". "Glow" was written in 2016 during writing sessions for XCX's unreleased third studio album. XCX initially planned to include the song on the album, but ultimately decided not to as she stated that "it never quite fit in my world in its original form".


Meanwhile, we also offer Christmas Love sheet music for you to download

The Lyrics of Dream Glow: