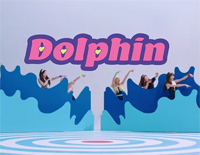 Free Dolphin piano sheet music is provided for you. So if you like it, just download it here. Enjoy It!

Dolphin is a song performed by Oh My Girl, a South Korean girl group formed by WM Entertainment. It became the group's highest-charting releases to date, peaking at ninth on the weekly Gaon Digital Chart. The group is composed of seven members: Hyojung, Mimi, YooA, Seunghee, Jiho, Binnie and Arin. Originally an eight-piece group, JinE left the group in October 2017 due to health issues.