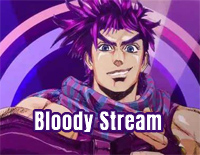 Free Bloody Stream piano sheet music is provided for you. So if you like it, just download it here. Enjoy It!

Bloody Stream is the debut single by Japanese artist Coda. The song, written by Saori Kodama and composed by Toshiyuki O'mori, is used as the second opening theme for the 2012 anime adaptation of the 1987 manga JoJo's Bizarre Adventure, representing its second arc Battle Tendency. The song is noted as having an emotional and fashionable tune, with the husky yet charming voice of the song vocalist adding a further stylish nature to the song as a whole.