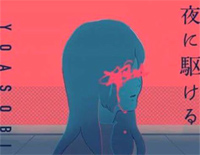 Free Yoru ni Kakeru piano sheet music is provided for you. So if you like it, just download it here. Enjoy It!

Yoru ni Kakeru is the first song released by Japanese music duo Yoasobi. It was released on December 15, 2019, and was based on Thanatos no Yūwaku, a short story written by Mayo Hoshino published on the story hosting site Monogatary.

The song's music video was published on Ayase's YouTube channel on November 16, 2019 and its view count surpassed 20 million in 7 months. Soon after its release, the song topped the popularity charts on Spotify and Line Music. On June 1, 2020, the song also topped the Billboard Japan Hot 100.