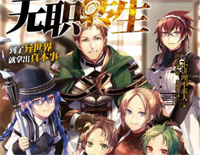 Free Tabibito no Uta piano sheet music is provided for you. So if you like it, just download it here. Enjoy It!

Tabibito no Uta, or The Traveler's Song is used as the opening theme song for Mushoku Tensei: Isekai Ittara Honki Dasu. The anime was later announced on October 18, 2019 to be a television series, which is directed by Manabu Okamoto and animated by Studio Bind, with Kazutaka Sugiyama designing the characters, and Yoshiaki Fujisawa composing the music.

And Tabibito no Uta is sung by Yuiko Ōhara, a Japanese singer and songwriter from Chiba Prefecture who is affiliated with Toho Animation Records. Starting her career as a live performer in 2012, she would also participate in several auditions and competitions.